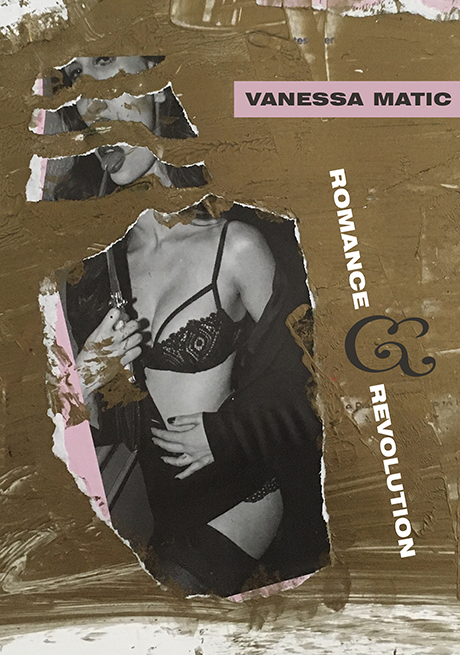 Debut collection of poetry from L.A.-based writer and filmmaker Vanessa Matic, whose work has appeared in C-Heads, Flaunt, ZOO, Nakid, BLEND, i Love Fake, Black & Grey, and other U.S. and European arts and culture magazines.

"Vanessa Matic channels the verbal fire of generations of unhinged mavericks from A. Rimbaud to A. Ginsberg, expressed with the relentless intensity of Patti Smith. You fully expect the poems to burst into flames in your hands."
— Alan Bisbort, author of Beatniks: A Guide to an American Subculture, and editor of PleaseKillMe.com

"Romance & Revolution is a darkly dazzling, magnetic collection of poems written with raw urgency and hallucinated elegance. Vanessa Matic writes vividly and compellingly of journeys and rooms, moods and memories, sex and sorrow, of the complexities of relations between the sexes, and the terrors of embodied selfhood. The worlds—inner and outer—that Matic depicts in these potent poems are ravaged and sundered but are furnished also with momentary illuminations. 'The world of scars' in which she finds herself an exile is also seen to be a realm of renewal: 'There is' she writes, 'this nameless birth from death.' Disjunctions and a delirium of similes lend Matic's poems a febrile lyricism, a dreamlike intensity, and a haunted, haunting quality."
— Gregory Stephenson, author of Exiled Angel: A Study of the Work of Gregory Corso; The Daybreak Boys: Essays on the Literature of the Beat Generation; and Pilgrims to Elsewhere: Reflections on Writings by Jack Kerouac, Allen Ginsberg, Gregory Corso, Bob Kaufman and Others

"Vanessa Matic is both tour guide and hostage to a dark night of the soul, careening through ecstasy and pain. In Romance & Revolution, she aims the headlights toward America, all neon and narcotics and Chanel 5. Referencing Gatsby and Ginsberg, Jeff Buckley and Radiohead, her prose poems gun it toward the age-old subjects of love, death, and religion and take occasional side streets to muse on art, feminism, or social media. From the backseat, we writhe in the lithe beauty of her phraseology, yet grip onto the armrests as she toys with punctuation, abandoning it altogether in an adrenaline rush or splitting well-known idioms with commas as if to tease us."
— Stephanie Nikolopoulos, co-author of Burning Furiously Beautiful: The True Story of Jack Kerouac's On the Road

"This line from the book about sums it up, 'Smear me across your paradise, across the drug floor of tantric punk rock. . . . I am a woman not a dream, the way you let me roam is for you made me into a fantasy.' Vanessa Matic is no fantasy, although you may want to make her one. She's as real as the lives of the telecine rock legends she adheres to—like a pantheon of panoptic gods. Who is watching the watchers? Well, if we have VM watching, then at least the subjective-objective is a whole lot more fun! Read this book."
— Bil Brown, poet and editor of BlackGreyMag