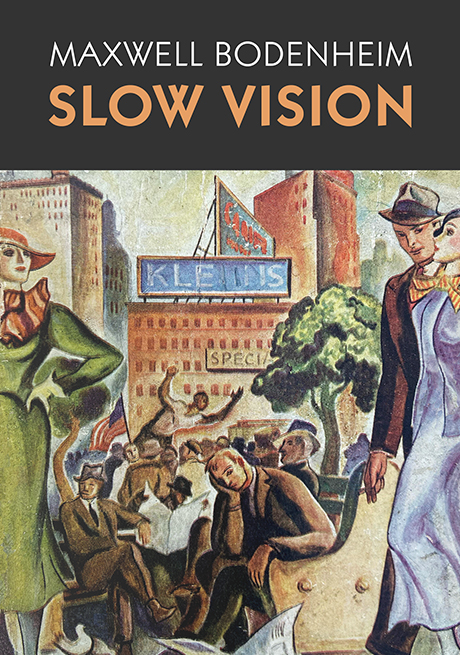 "I am a distinguished outcast in American letters—a renegade and recalcitrant, hated and feared by all cliques and snoring phantom celebrities, from ultra-radical to ultra-conservative—an isolated wanderer in the realm of intellect and lithely fantastic emotion, hemmed in by gnawing hostilities and blandly simulating venoms . . ."

With Maxwell Bodenheim's 1933 novel New York Madness behind him, he began work on a new one in the autumn of that year. This time he chose to depict a young couple, a pair of average Americans swept up in labor struggles and reduced to painful subsistence, portraying the protagonists' gradual understanding of labor unions and the psychological/philosophical/political trials that led to sympathetic affiliations in Socialism and Communism. Thus initiates their "slow vision," a simmering understanding of the manifestations of Leftist movements and of special relevance to the climate of the first two decades of the 21st century.

Bodenheim's books—thirteen novels and nine volumes of verse—are mostly out of print. Some were resurrected in the late-1940s through the mid-1950s as cheap pulp paperbacks after Bodenheim had lost the rights to his own work. Slow Vision was not one of them. Presumably, nobody wanted to be reminded of the Great Depression. Slow Vision would be Bodenheim's last published novel and literary history has forgotten it. The original edition is a hard find, even for the most dedicated of Bodenheim collectors, of which there are few. Copies without a dust jacket seldom surface in the marketplace, and those with the original artwork are downright impossible to find. This new edition of Slow Vision hopefully signals a rebirth of all of the abandoned works of this sadly neglected and much maligned writer. He dedicated his life solely to his craft and deserves nothing less than our reevaluation.

"A stirring and, in some ways, important book on the proletariat."
—Rochester Democrat and Chronicle

"Slow Vision is easily Maxwell Bodenheim's best novel, perhaps because he has now found something worthwhile to write about."
—The New Masses

"Slow Vision is decidedly the best of Bodenheim's novels, and it is symptomatic of what is happening at the present time in our American cities."
—The Daily Worker